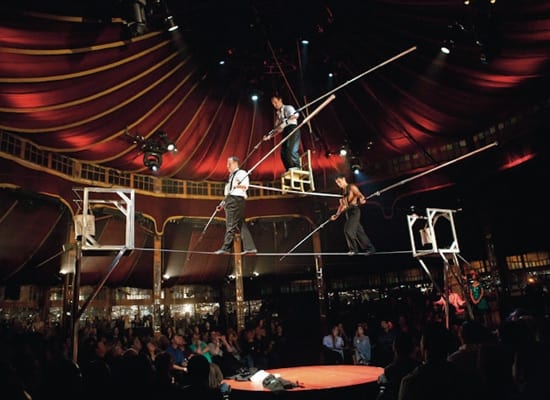 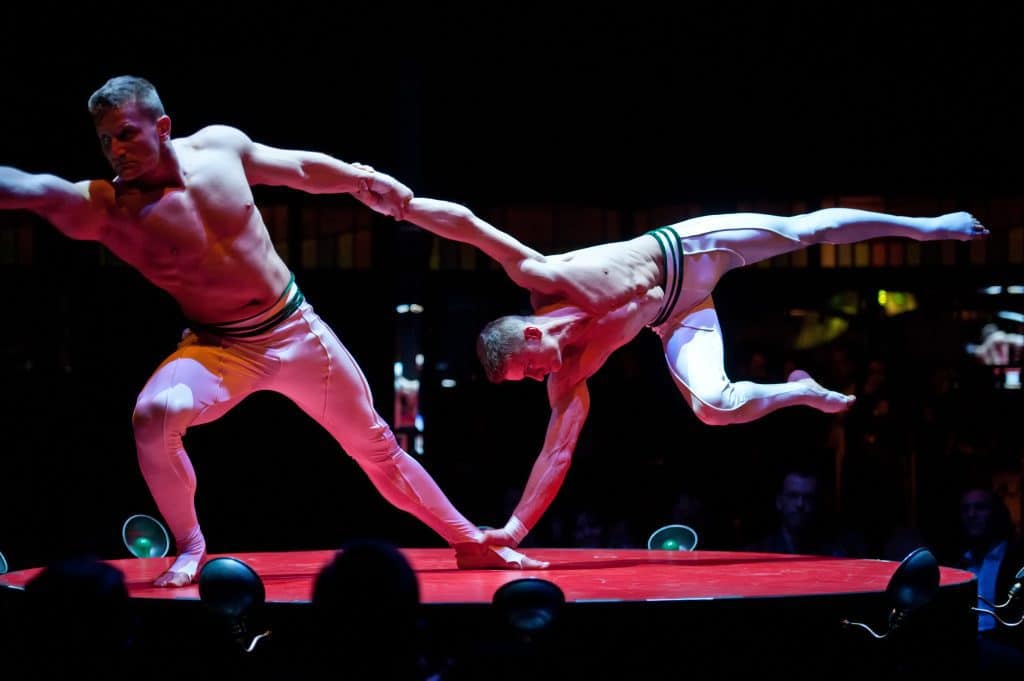 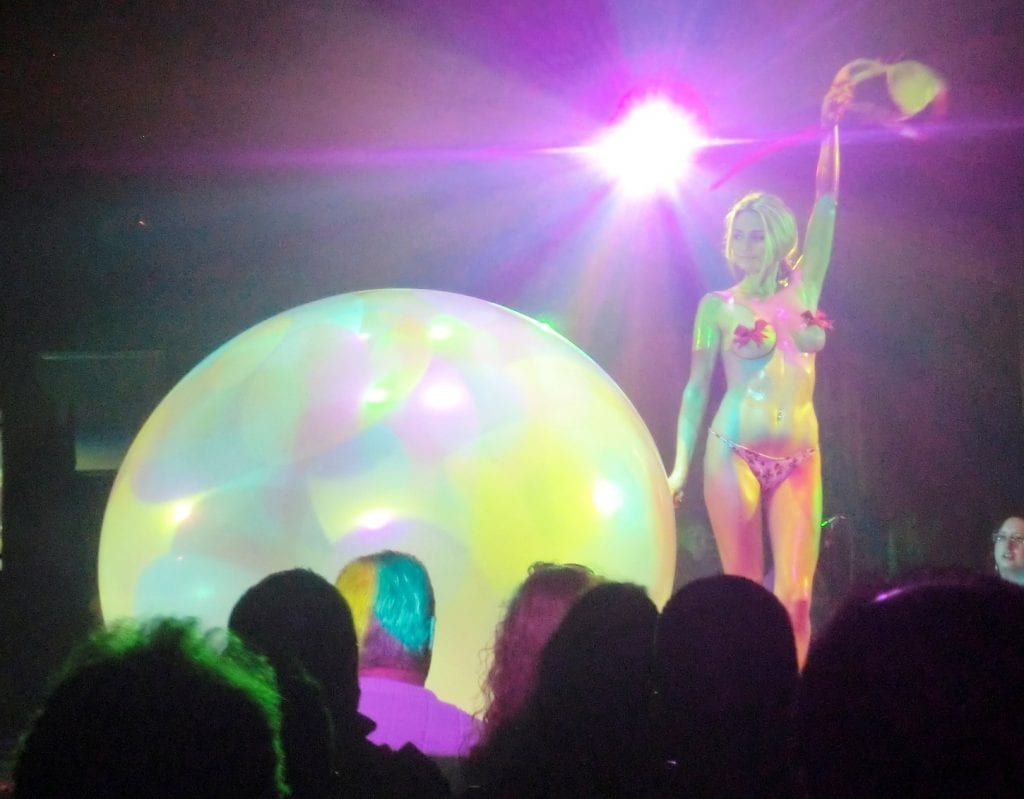 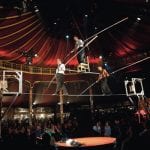 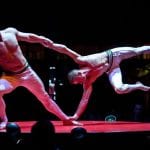 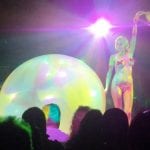 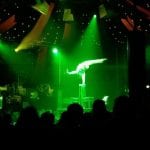 If you happen to be in Las Vegas and have time to attend only one of its many shows, Absinthe Las Vegas should be your number one choice.

This resident show had its premiere in 2006 as a contemporary circus but it is much more than that. It perfectly combines all the most-loved international themes — a carnival with a feeling of vaudeville and the sense of burlesque that happens to be in a circus-like tent called spiegeltent.

Apart from many performers whose gymnastic skills will take your breath away, the Absinthe Las Vegas show has three main characters. The host of the show is the Gazillionaire, a rich and slimy comedian whose role is to introduce the acts and incorporate spectators into the show. He has an assistant, Penny Pibbets, who performs a sock puppet act. Finally, there is the Green Fairy, a singer who plays the role of an exotic dancer.

The Absinthe Vegas show will amaze you with choreographies you won’t find anywhere else. The show has been immensely popular for almost ten years now, which is enough to make you believe that it’s a once-in-a-lifetime spectacle you shouldn’t miss.

The show was initially supposed to take place in Fontainebleau Resort Las Vegas that was unfortunately closed. The Caesars Palace gave the producers of the show an opportunity to perform in a temporary tent at the Roman Plaza. The performances were on for 90 days, after which the Las Vegas Fire & Rescue Department concluded that the tent didn’t meet vital safety requirements and needed to be dismantled.

This is when the president of the Caesars Palace, Gary Selesner, took it upon himself to make it possible for the show to go on, which proved to be a great decision.

The stage takes a circle shape, which allows the audience to sit around in close proximity to the performers. You can watch the Absinthe Vegas show twice a day — either at 8 PM or 10 PM. The good news is that the performance is available on any day of the week, which makes it easy to include it in your itinerary.

If you find yourself in Las Vegas, the Absinthe Vegas show is definitely something you should spend both your time and money on. There are so many exciting things you can do in Sin City, but this show is a unique experience you shouldn’t miss.

It is filled with humor and music, featuring some of the world’s most renowned acrobats and performers who will keep you on the edge of your seat until the very end. You might get scared for the performers during some dangerous scenes, while some segments of the show will make you laugh like crazy.

Even some of the best Hollywood actors like Gerard Butler, Daniel Radcliffe, and Channing Tatum devoted those 90 minutes of their lives to the Absinthe Vegas show. These movie stars couldn’t hide their excitement throughout the show, which is a good enough reason to see the number one show in the history of Las Vegas.

Bear in mind that the show targets 18+ audiences since some parts of the performance are not suitable for children.

Absinthe Tickets — How Much Do They Cost?

The tickets for the Absinthe Vegas show might seem expensive at first, but they are definitely worth it since the performance is something you cannot see anywhere else. The seating chart is divided into five categories.

The most expensive tickets are the Impresario’s Reserve and there are only six of those. The next category is the Premium VIP and these seats are the first row of chairs around the stage representing row A. Then, the next two rows, B and C, are the VIP section. Finally, there is the Reserved Seating part that covers the greatest part of the room, as well as the Reserved B Seating section that is located the furthest from the stage.

The lowest ticket price for the Absinthe Vegas show is $99, and that doesn’t include tax. The closer you are to the stage, the ticket becomes more expensive. The premium seats in Impresario’s Reserve and Premium VIP come with a complimentary drink.

How Long Is the Absinthe Las Vegas Show?

The Absinthe Las Vegas show lasts for 90 minutes and keeps you occupied from the first to the last second. You will forget about your watch once you focus on the spectacular performance of all the dancers, singers, acrobats, and comedians on stage.

Moreover, if you happen to be a person from the crowd that the Gazillionaire chooses to join him on stage, the time will fly even faster.

Where can you watch the Absinthe Vegas show?

You can watch the Absinthe Vegas show on the Roman Plaza, the forecourt of the Caesars Palace.

How to find tickets for the Absinthe Las Vegas show?

How long will the Absinthe perform at the Caesars Palace?

The Absinthe Vegas show started performing at the Caesars Palace in 2011. The contract they signed should expire in May 2020 but both parties agreed that the show should stay in the venue for at least two more years due to its massive success.

Is there a table service during the performance?

Yes, you can order drinks during the Absinthe Vegas show from the designated areas located in the back of the spiegeltent.

Is the Absinthe Las Vegas show suitable for children?

The Absinthe Vegas show is marked as an 18+ performance, which means it is not suitable for anyone younger than 18.

What other shows should I see if there are no tickets for the Absinthe show?

In case you found out about this breathtaking show too late and there are no tickets left for the date of your preference, there are some alternatives you can explore. One of them is the Jabbawockeez Las Vegas show at MGM Grand that offers a fantastic hip-hop dance performance by a male-only troupe. If there are no tickets left for this show either, try your luck with Blue Man Group at Luxor. This show includes performers who are blue from head to toe.

Looking for the Best Shows in Vegas? You’re in the right place.