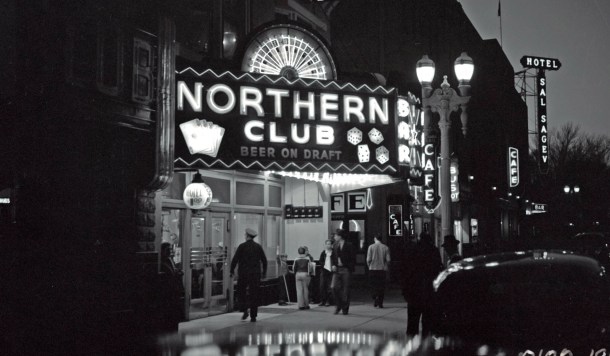 The Northern Club on Fremont St. was the first establishment to be issued a gaming license in Clark County in 1931.
Blog

It was 1931, well into the depths of the Great Depression – the worst that the
country had seen since the 1890s. Every state at the time, was then desperately in search
of a path to economic recovery – though little hope could be found. Yet Nevada had been
hit far worse than the others, since they’d been in their own depression from the end of
World War I. The “silver-state” was possessed of little commerce and virtually no real
industry of any kind. It was a state known for silver, sand-fleas and desert lizards. As a
result, their administration was doomed to face a Depression – within a Depression.

In desperation, Governor Fred Balzar led a conference between the state’s leadership and the patriarchs of the most prominent families in Nevada, to jointly find a
practical course of action – one that could effectively rejuvenate the state’s economy. It
was realized, that with a national lack of discretionary money, tourism was not a valid
hope. But in time, an alternate two-part plan took shape, which might readily attract
crowds of visitors from all over the country. First, they’d reduce the legal residency time
to six weeks, and thus – quite legally – allow for a quick divorce, for any U.S. citizen.

Their second “related” idea, was to open a “pass-time” to those who’d be awaiting
legal residency – by offering legalized gambling! Although, in the decades since the Civil
War, legalized gambling in Nevada had been approved and rejected many times, this new
need for legalized gaming became absolute. The wheels of government spun into action.

A freshman Nevada Assemblyman, Phil Tobin, immediately brought Assembly Bill
98 to the floor, which would legalize a range of casino games. It was signed into law by
Governor Balzar on March 19, 1931. As a curious side-effect, however, every “backroom” gambling den in the state was suddenly “out of business” – which at once called a
serious issue into focus. Gambling, at the time, had long been illegal throughout the
United States, so that “illegal” dens and road-houses were everywhere. Illegal also meant
“unregulated”, so that “gaffed” slots and rigged roulette wheels, were common. To put it
most simply, the public saw all gaming houses as “shaddy”, by their nature. How then
would Nevada prove that they “we’re the only ones to assure honest gaming, anywhere?”

This concern became the backbone of the state’s new “Gaming Control Board”,
which would not only regulate, oversee and control every gaming operation in the state,
but also – as widely advertised – they’d function as “the great mediator”. Their mandate
was simple: “No game or, gaming operation, would be allowed to cheat any player –
nor will any player be allowed to cheat at any casino game.” In the decades that
followed, an army of regulators, in plain clothes, surreptitiously eyed the operations of
every casino in the state, and if a gaffed machine, or rigged wheel was found, that club
would be a parking lot by the following morning.

The History of Dice

Read More
The History of Dice

Read More
Money – What It’s All About
Submit a Comment